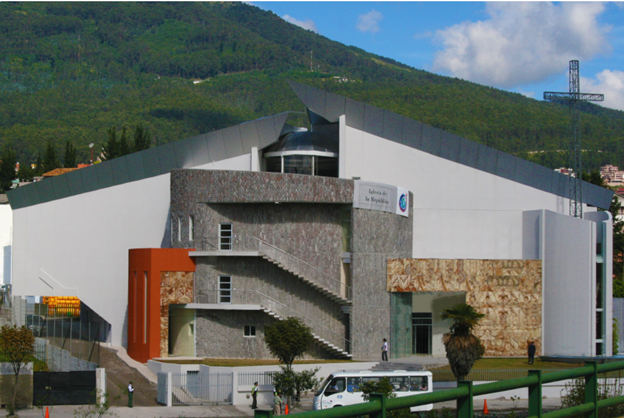 (Photo of Republica Church, that just celebrated its 25th anniversary. It is one of six Encounter With God churches in the city of Quito, Ecuador.)

Decades of CMI memories collect dust on the storage room shelf. Old polaroids, 6×4 prints curled under at the edges, and stacks of projector slides—all analog formats fit for a museum.

For years they sat mostly undisturbed in binders, stuffed in filing cabinets, or piled in boxes at Roy LeTourneau’s house.

But a few weeks ago, my nephew, Jackson, gave them some well-earned attention.

It started with a need to rearrange some office space at CMI. Plus we had an important ministry anniversary approaching. Something about historic anniversaries gives permission to pause, reflect, and remember.

So we tasked Jackson with a summer job. Transfer 47 years of CMI history into digital format.

As he scanned in the pictures, I would catch a glimpse of his computer screen over his shoulder. A memory would light up like a firecracker. A smile would emerge across my face as I recalled the story behind the photo with wide collars and wider ties.

The people are different. Many were former staff, missionary colleagues, and Latin pastors. Some serve in new ministries. Some have retired. And some have gone to be with Jesus.

But some things haven’t changed at all.

Photo after photo pictured a Latin American urban church that would not exist without your support and the leadership of CMI.

Yes, the time and people are different. But guess what isn’t.

The churches in the picture.

Every single one of those churches is still here today. Each one proclaiming the gospel, discipling believers, caring for the needy, and impacting the city.

It was a powerful reminder of how your prayers and support empower gospel-centered urban churches to impact generation after generation.

Fashions, programs, even people come and go. But the Word of the Lord and His Church endure. That is a legacy that lives beyond our days!